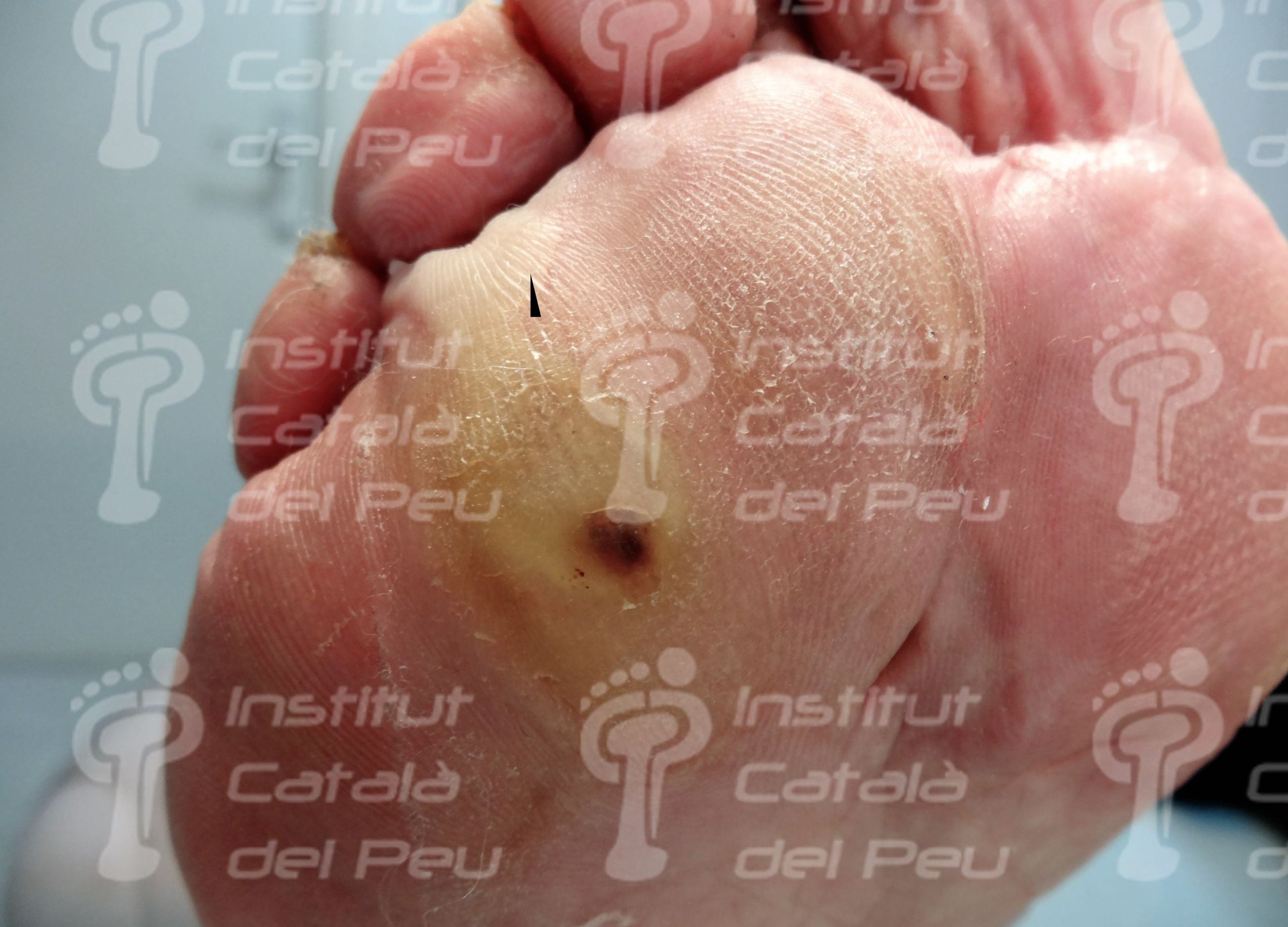 The plantar heloma, commonly known as “pin” is a focused hyperkeratosis which affects the deepest layer of the epidermis as a consequence of the pressure caused in the skin by an osseous point or an external agent in the same direction and opposite direction.

Occasionally, the alteration of the stratum basale and of the epidermic crests makes the heloma to recidivate as time goes by although the pressure made on the epidermis is eliminated.

The heloma is produced by hyperpressure of the skin between two planes or hard surfaces either by pressure between a bone of the foot against an external agent, like for instance, the footwear or the ground or the pressure made on the skin by two osseous surfaces, (for example the interdigital heloma which appears between two toes). This pressure causes an ischemia or a lack of blood flow in the epidermis made by the appearance of keratin from the basal layer to the cornea by a process of keratinization of the keratinocytes. This entails that the location of the helomas is very varied. They can appear in the sole of foot, between the toes, in the dorsum of toes or in the outline of the unguinal layer. Clinically, helomas appear covered with a callus with a hard and painful texture to the direct pressure on the heloma unlike simple callus which are more superficial and painless. They show a dark beige color and a surface circularly delimited. When the hyperkeratosis is delaminated, we can see a keratinical structure with a conical shape, being the base of the cone the most superficial part of the skin and the apex of the cone the deepest part of the epidermis. This is due because the pressure is concentric and it is produced from the cutaneous surface to the internal side of the epidermis. This is the reason why helomas don’t have a root because being lessions by pressure or friction they reproduce every time that the same circumstance is repeated.

The prevention of the appearance of helomas has to assess mainly:

The treatment of the heloma is varied, being chiropody the most immediate treatment and with excellent symptomatic results  at a short term.

It consists in the delamination  of the corneal layer with scalpel through the total enucleation of the keratinical layer. Depending on the reasons which cause the heloma, it will reappear with more or less frequency.

In those cases in which the heloma reappears with frequency or intensity, we have the option of conservative treatments in order to reduce the pressures which cause such lesion. These treatments can be treated with personalized insoles in the case of plantar helomas or with silicone digital orthesis in the case of helomas at a digital stage.

When the conservative treatments fail, surgery can be considered as a resolvent treatment. In the case of interdigital helomas, the exostosis or osseous prominence is eliminated and in the dorsal helomas, surgery is designed to correct a wrong alinement of the toe (claw, hammer, etc.) as a cause of friction of this one with shoes. Surgical intervention of plantar helomas is possible; its need has to be considered deeply because it can lead to undesirable side effects.

THE INSTITUT CATALÀ DEL PEU CONDUCTS A BIOMECHANICAL ANALYSIS TO THE MOTORCYCLING...

THE INSTITUT CATALÀ DEL PEU CONDUCTS A BIOMECHANICAL ANALYSIS TO THE MOTORCYCLE...
Scroll to top