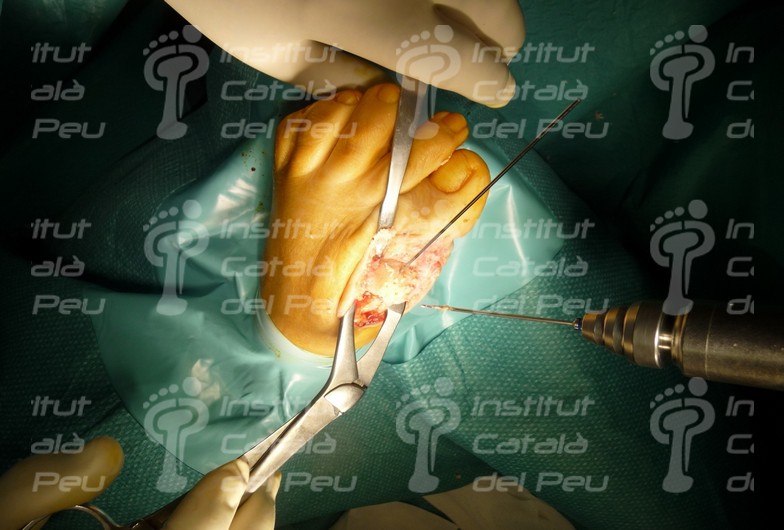 The hallux rigidus is the second cause more common of pain in the metatarsophalangeal joint of first toe after the hallux valgus, so this is a pathology which we often find in the office. When the conservative treatment doesn’t get the aim of diminishing the pain and improving the walking, we have to suggest the patient surgical alternatives adapted as maximum as possible to the deformity level which he shows, age, sporting activities, work, etc. with the purpose of eliminating the pain and improve his quality of life.

We define the hallux rigidus as an arthrosic and progressive degeneration of the first metatarsophalangeal joint (AMTF), causing a limitation to the dorsal flexure on initial stages and an ankylosis of this joint on advanced stages.

The etiology in unknown, although there are several factors which may contribute to the appearance or deterioration of the pathology such as the repeated microtraumatisms, rheumatic diseases, gout, previous surgeries, etc.

To choose a suitable surgical technique it would be necessary to value the patient as a whole (daily work, complementary activities, age, etc.) as well as a radiological assessment of the deformity in order to state a prognosis and to suggest a correct surgical treatment. For this, Coughlin’s and Shurnas’s classification suggest 4 stages according to the affectation level. In I and II levels (picture 1) we will make surgical techniques in which the joint will be maintained, trying to increase the DF movement from the MTF. (OT Weil, implants, Keller modified/interposition arthroplasty).

In all cases, besides the chosen surgical technique, it is made an articular cleaning to eliminate the osteophytes.

The technique with best results is usually the metatarsophalangeal arthrodesis, being able to be fixed with screws, grapes or plates.

The most important thing to make the arthrodesis is the preparation of the articular surfaces and the position in which we will arthrodes the AMTF (pictures 3 and 4). The correct position for arthrodesis (being the foot in charge), is with the phalanx axis parallel to the ground, an angulation of 20-250 in the sagittal plane from AMTF in dorsal flexure, 5-100 valgus in the transverse plane and with a neutral rotation of toe (the position of the nail is helpful, which must remain completely parallel to the ground). For the making of articular surfaces are usually used concave-convex fraises, fraising and eliminating the articular cartilage so the fusion of the joint will be the most complete and stable as possible. Once the head of the metatarsal and the basis of the proximal phalanx are fraised we must keep the joint in the correct position and choose the osteosynthesis material. In case of choosing cannulated screws to fix the arthrodesis, we put two Kirschner needles (AK) which will support the AMTF and they are useful for us to broach and make the guide hole to put the screw, putting the screws crossed between them (picture 5 and 6). In case of choosing to fix the arthrodesis with a plate, system which is more stable biomechanically (picture 7), we also use the Kirschner’s  needles AK to support the AMTF, laying the plate in the dorsum of the AMTF and broaching to put the screws which will support the plate. We repeat the process to fix the joint with memory grapes, putting a grape in the medial side of the AMTF and another in the dorsal side.

In the levels III and IV (picture 2) we will make interventions in which we fuse together the MTF in order to eliminate the little movement which this has and thus to eliminate the pain (arthrodesis). 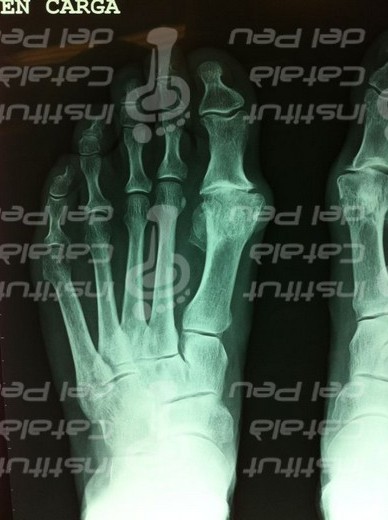 Radiography of an hallux rigidus on a second stage 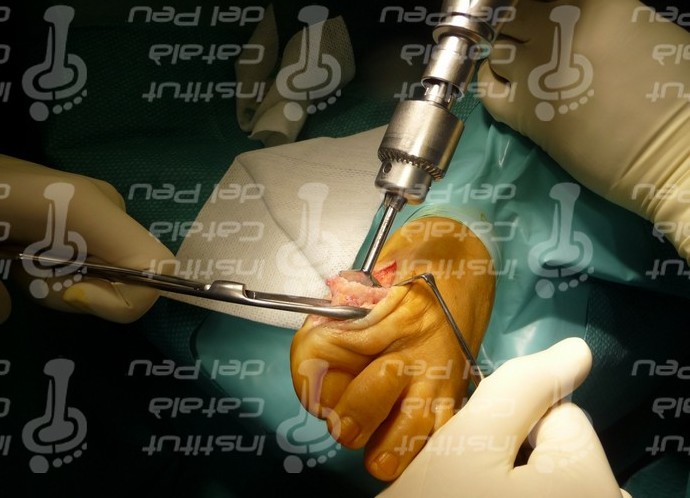 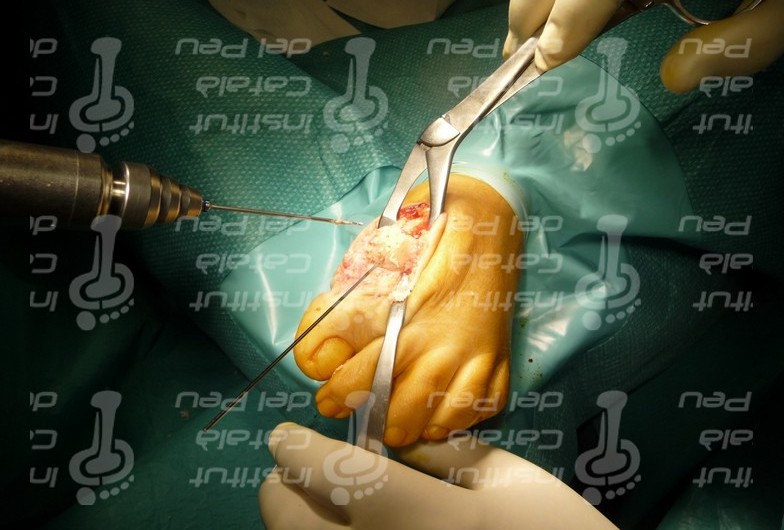 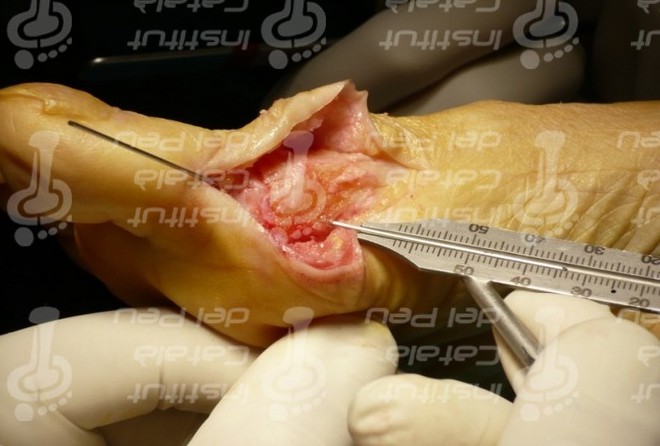 6 Laying of Kirschner’s needles (AK) to support the AMF and to broach in order to put the osteosynthesis material.

Fixation with a plate of first AMF.

BITES OF ARACHNIDS AND INSECTS
Scroll to top