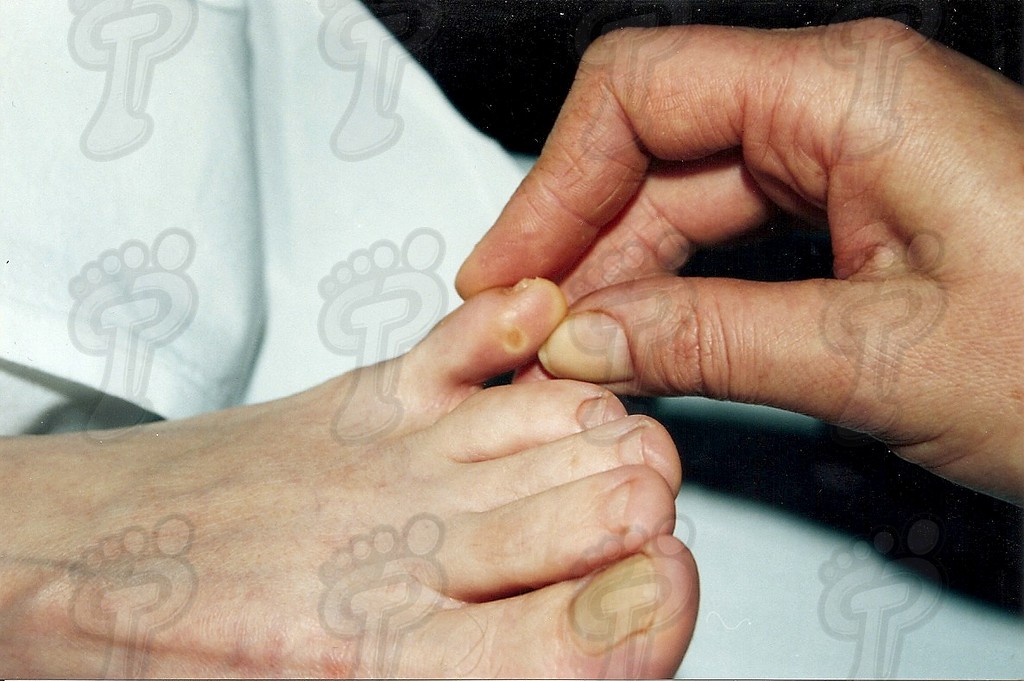 A digital exostosis is a circumscribed partial hypertrophia from the surface of the phalanx of any toe. The exostosis is a process of the phalanx without a broken periosteum and with no migration. Radiologically, it is unilateral, with an osteocartilaginous configuration, without its own ossification nucleus, radiopaque and with no deference from the adjacent bone. The exostosis visually produces a distal hyperkeratosis or next to it, because between the skin and the exostosis there isn’t enough tissue to produce heloma. The main features of this pathology are:

Once we have finished the conservative way, we put into practice the surgical treatment. We have to consider that in many cases, we are talking about middle age patients, with frequent pain and of high intensity which need a definitive solution. The required material for this kind of surgery is:

We start with a nerve block anesthesia and with no hemostasia (or at least after the scaling). Then we make a transverse incision in the distal in the dorsum plantar pedis zone in a distance of two or three millimeters from the osseous prominence, we insert the bistoury perpendicularly to the axis of the phalanx until the bone is touched and so we fall next to the osseous tissue in order to separate soft parts and to delimit the exostosis. It is advisable not to incise laterally because we could damage the neurovascular zone.

We insert a chisel separating the soft osseous tissue and we delimit the osseous prominence, which it is usually bigger than in the radiography due to radiotransparent cartilaginous zone. We thoroughly scale with the file from proximal to distal and from depth to surface (avoiding any movement from one side to another).

In the first layers (cortical and periosteum) we realize that the file slips and afterwards we sense the osseous scrape. We put pressure on proximal to distal with the thumb of the passive hand in order that the scraped osseous particles may come out. We widely scrape because when an osseous traumatism is produced there is always an osseous regeneration due to the superficial capillary rich network. If we don’t do it in this way, the osseous tissue may regenerate again, producing the exostosis again and in a short time. Then, we help the bleeding of the zone to let eliminating possible osseous particles. We flush the incision deeply with physiological serum. We make again another intrasurgical dorsum plantar radiography, if possible in the same presurgical position (when the radiography is oblique it doesn’t give the real size of the exostosis and the lateral radiography doesn’t show anything). In  the radiography we must observe that the head of the proximal phalanx is in the same plane than the base of the medium phalanx, if not, it can produce postoperative algia. If we can see a nebula in the radiography, they are small particles or osseous fragments that they must be drained by flushing because if not, they regroup and regenerate the exostosis again.

Lavages and radiographies must be done until the zone will be completely clean from osseous fragments. We infiltrate anesthetic and corticoids in a proportion of 9 to 1. We don’t have to infiltrate too much corticoid because when it touches the osseous trabecular which we have left as an external layer, it can produce serious postoperative problems, like the osteoporosis. In first place,  it is advisable to infiltrate the corticoid and in second place the anesthetic, to avoid the corticoid to be crystalized and producing yatrogenical disorders.

When the mixture has been infiltrated we put pressure on the wound, proximal to distal to drain it, because we are only interested in the anti-inflammatory pharmacological effect. In the next step we suture with surgical silk 5/0 by two simple points. In the photo we show to you, we splint the fifth toe with a “U” gauze, stopping in this way the dorsum plantar mobilization. For more subjection, we joint to the fourth toe with a circular bandage. The splint can be impregnated with some iodine like a “U” to give more rigidity or consistency and thus, less mobility to the fifth toe. The bandage must be semi-compressor lining up the toe. We suggest that the patient should have a 48 hours rest. We pause the corresponding analgesia and inform the patient about the steps he has to follow in view of certain anomalies. We withdraw the surgical dressing in 48 hours and it heals with povidone-iodine twice a day (morning and evening). We show the patient to make the bandage in a “U”way. We withdraw  the suture in seven days and then we make a silicone crest, which the patient should use until reaching the articular normality. This silicone must be used from six months to a year. 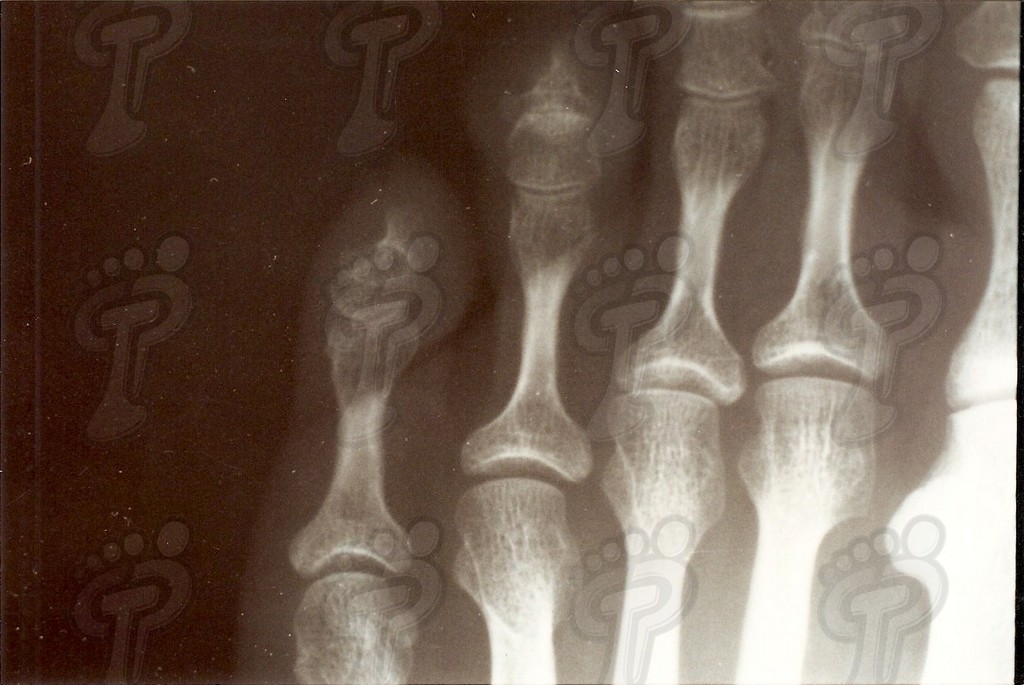 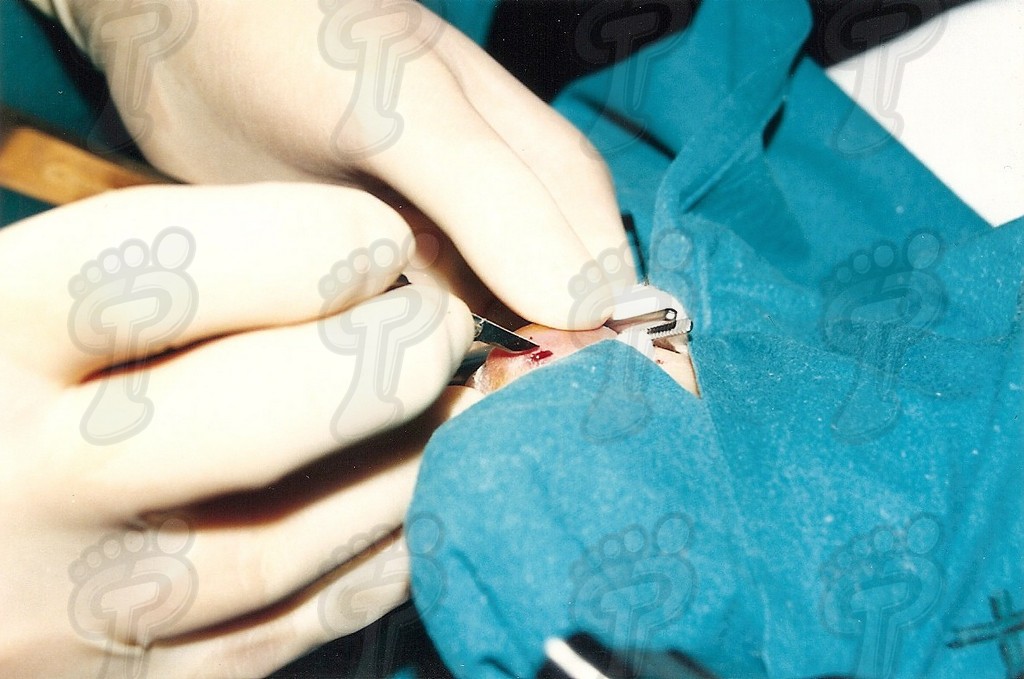 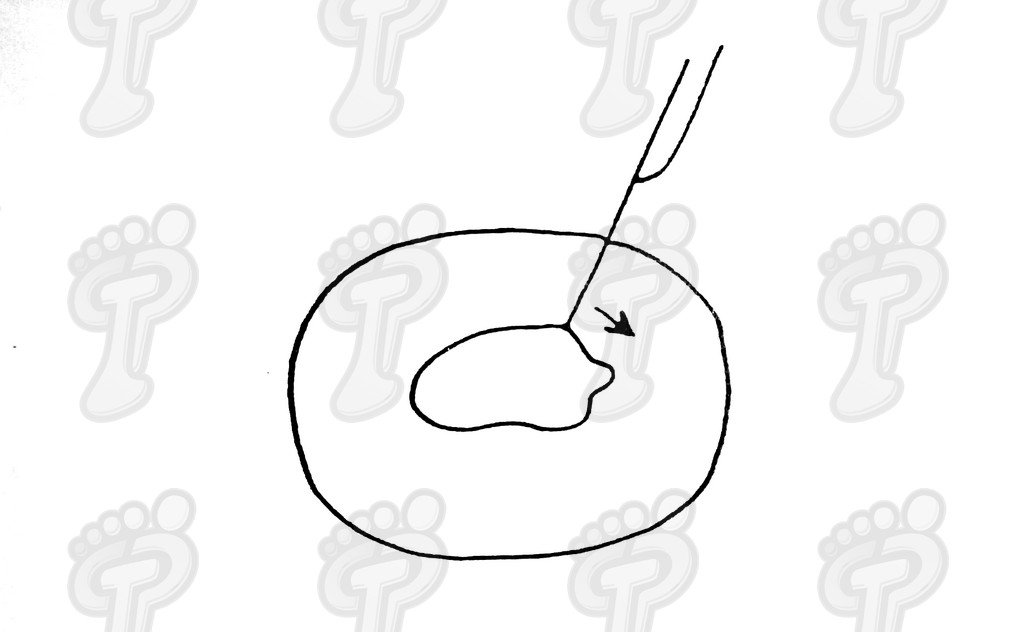 Frontal sketch of the flexura of incision 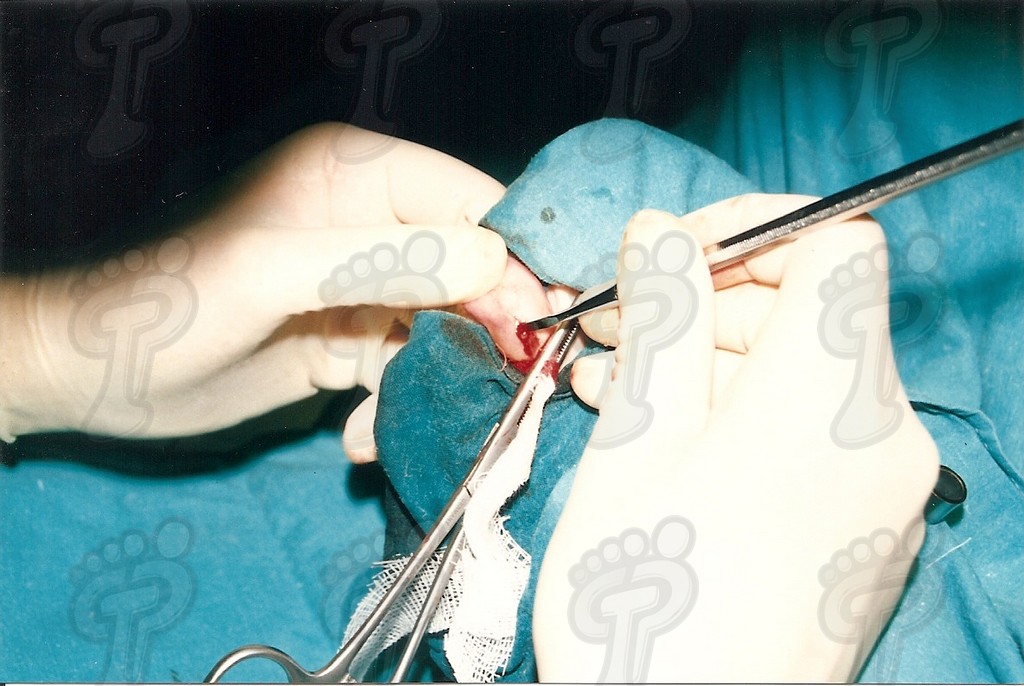 Separation of tissue through a chisel 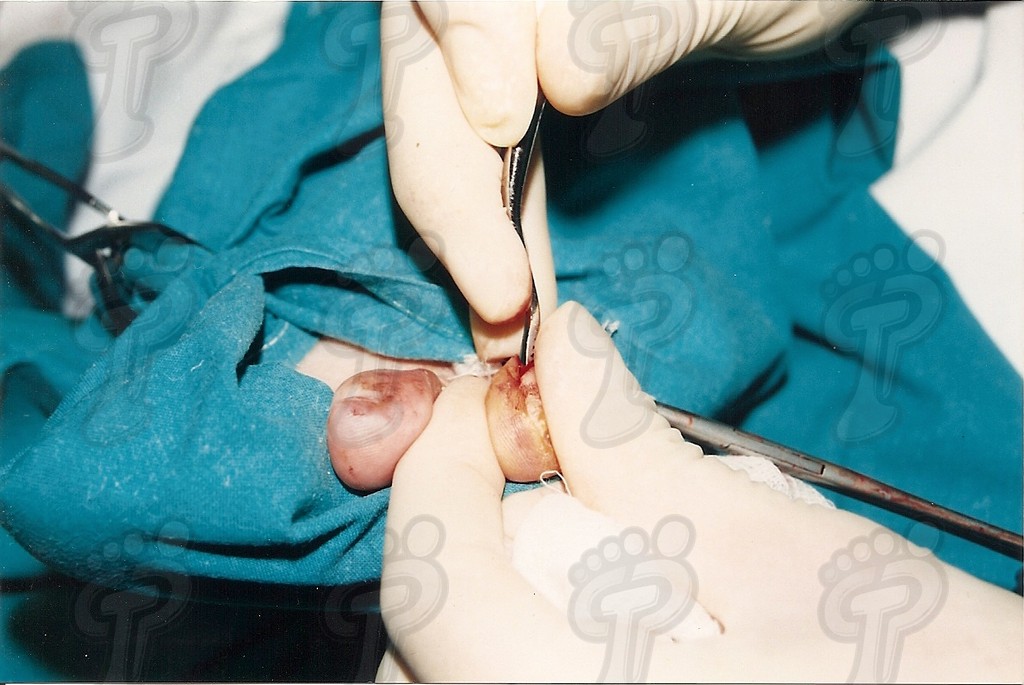 Scaling with a file. 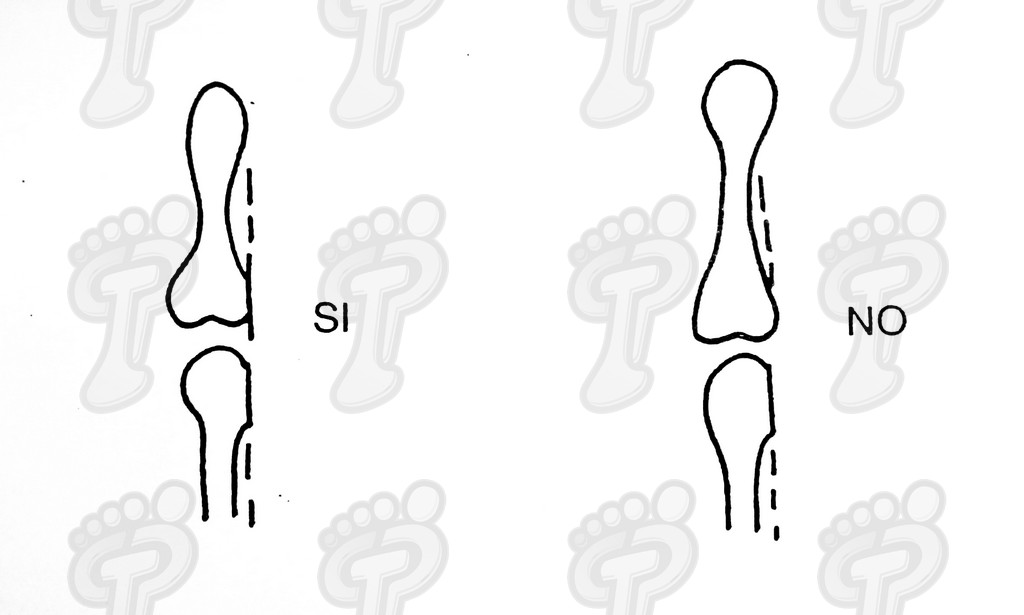 Correct and incorrect way of scaling. 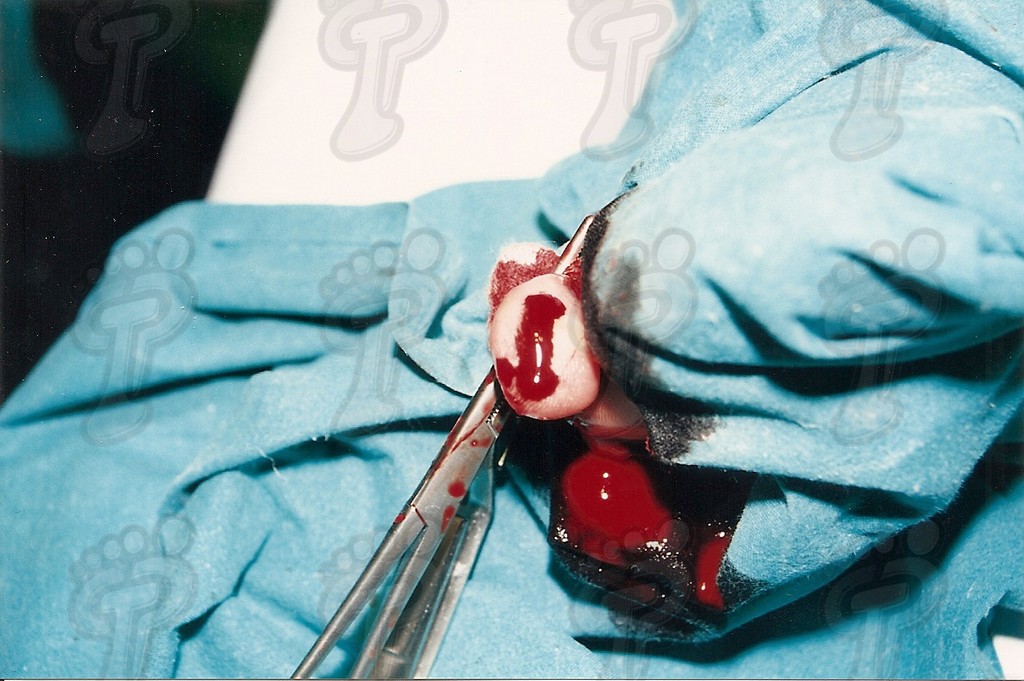 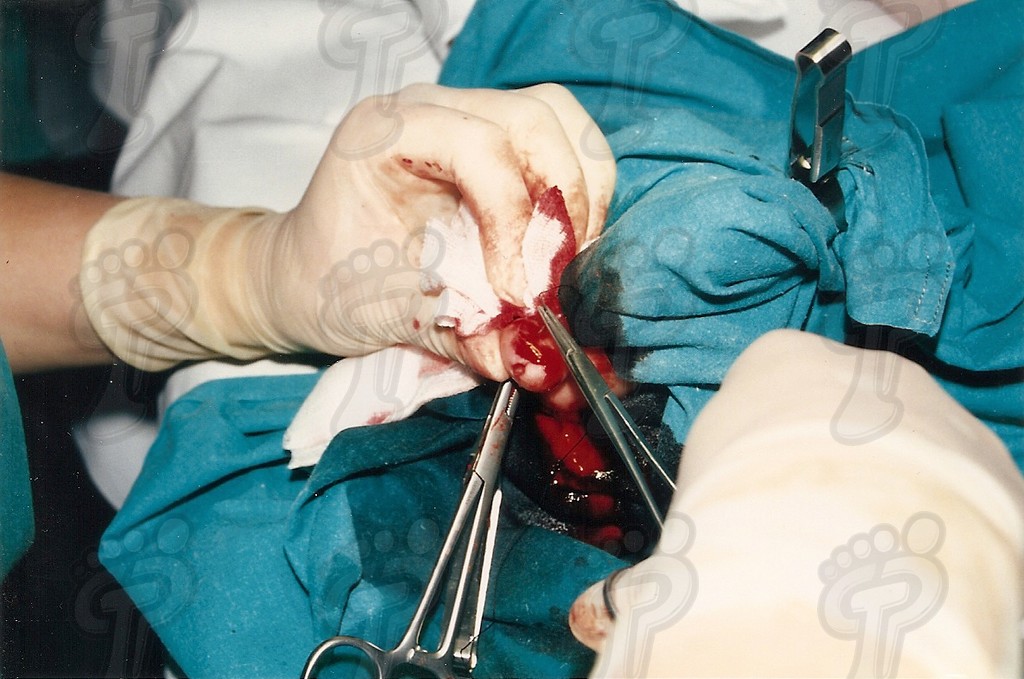 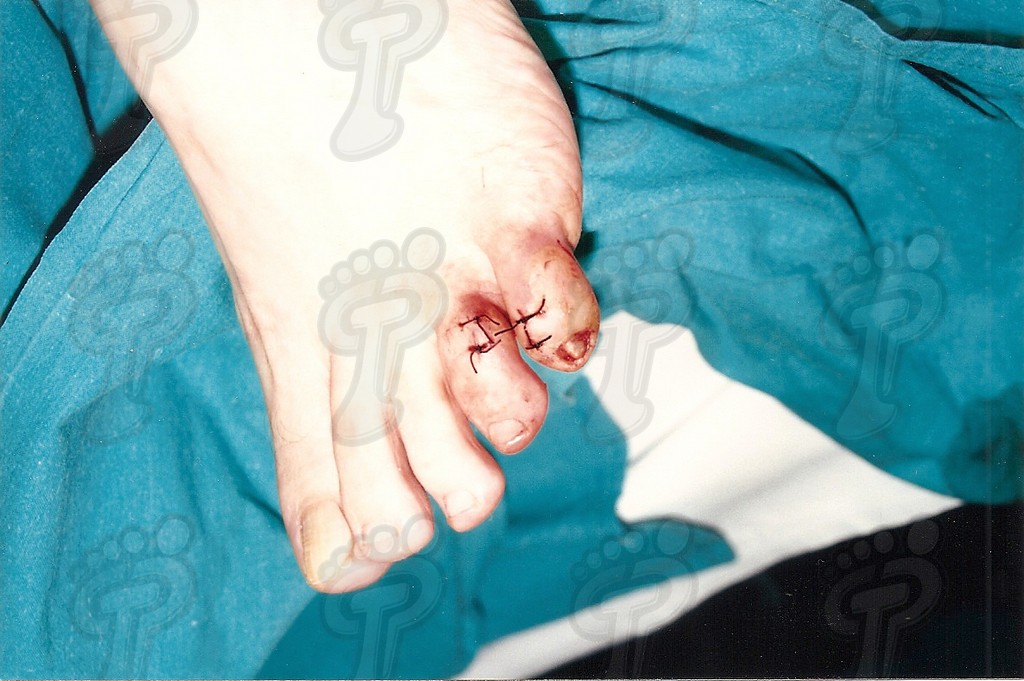 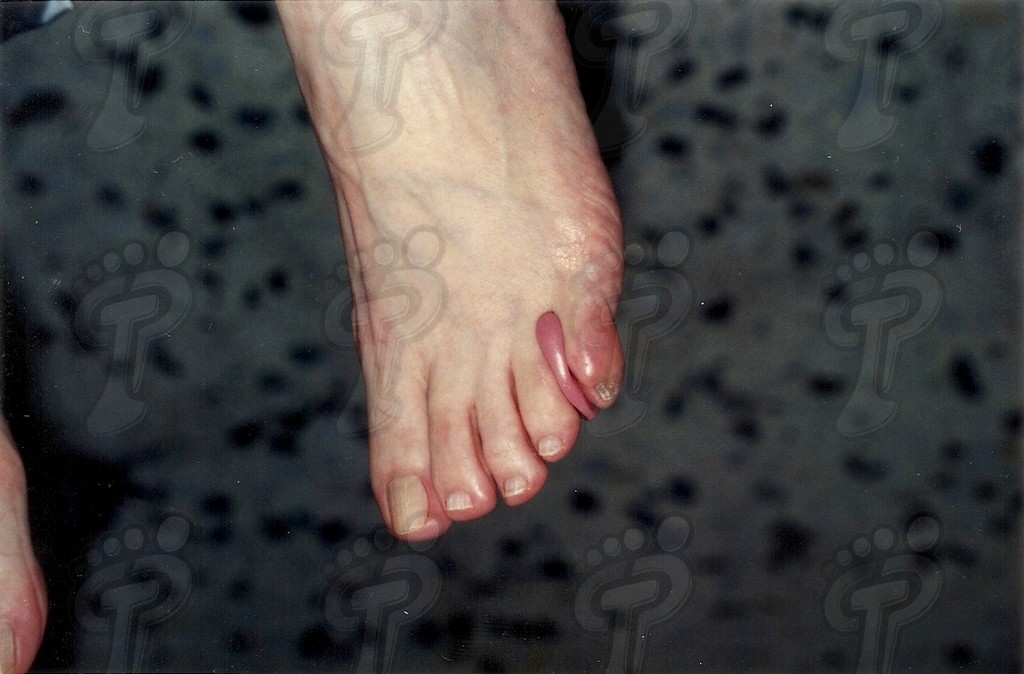 ASSESSMENT OF ASYMMETRIES IN THE LOWER EXTREMITY