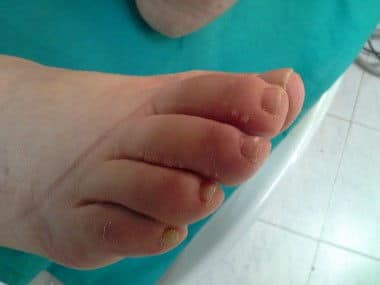 The lymphedema is a unique disease which shows edemas located mainly in arms and legs. The obstruction of lymphatic canals causes this edema and it is usually produced by a lack of the lymphatic system accumulating lymph in the interstitial spaces of the subcutaneous tissue. The lymph is a light liquid carrier of lymphocytes and plasma which is connected to the drainage function and immune defense. Its accumulation causes a loss of cutaneous folds, heaviness of legs, tense and bright skin with the appearance of verrucae refilled with transparent fluid as well as articular stiffness.

The lymphedema can be:

There are four kinds of lymphedema according to its distribution, location and appearance of the lymphatic ducts.

a)     Type 1: It is usually asymptomatic. We can see anomalies in the big collectors and not in the initial lymphatic.

b)    Type 2: at this level the skin is buried when putting pressure on it. The inflammation decreases when raising the extremity. There is an hypoplasia of collectors and an hyperplasia of initial lymphatic networks.

c)     Type 3: the skin is hardened and it doesn’t bury when putting pressure on it and the inflammation doesn’t decrease when raising the extremity. The collectors and initial lymphatic are widened.

d)    Type 4: lack of lymph nodes in  the skin and it shows lumps or dermic prominences. It is called lymphatic elephantiasis.

The lymphedema is diagnosed through a lymphoscintography and an isotopic lymphography (sight of lymphatic vessels through contrast) although the clinical recording, the exploration, the CAT or the magnetic resonance can confirm the diagnosis.

In this pathology the most commom treatments are:

In these cases is very important to prevent infections through an exhaustive hygiene. In case there is an infection (lymphangiitis) it is usually accompanied by pain, reddening, an increase of edema and fever.

Lymphedema in the right extremity. Watch the difference with the other extremity.

Type 2 lymphedema. Pressure on the back of foot.

Type 2 lymphedema. Effect of the pressure exerted in the zone

Lymphedema. Watch the dorsal edema and the elephantiasic appearance of the skin.

Problems that these patients have about shoes.

THE INSTITUT CATALÀ DEL PEU, AS A SCIENTIFIC ENTITY, COLLABORATES JOINTLY WITH...

The Institut Català del Peu makes an agreement with the football section of...
Scroll to top