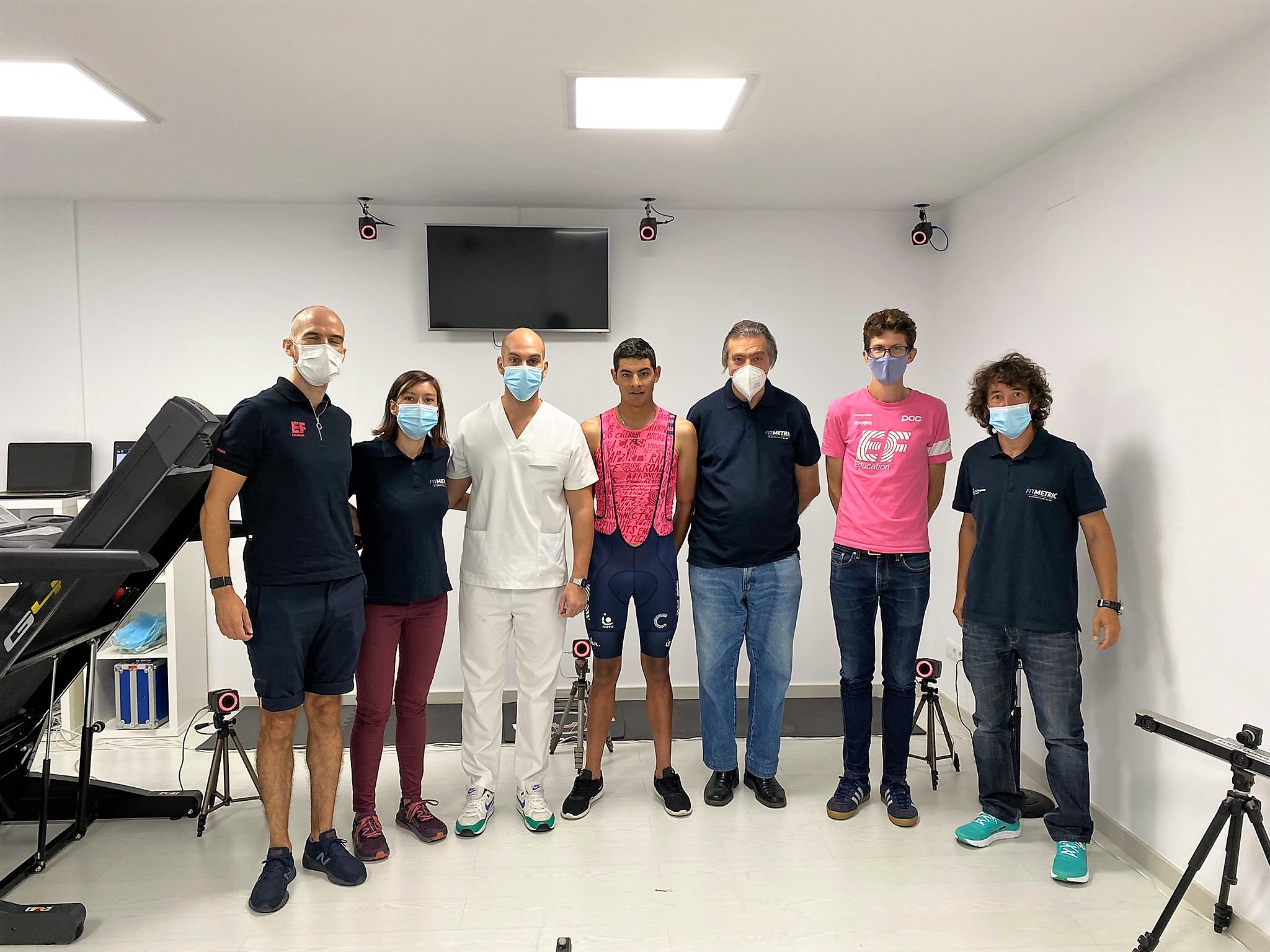 Last week we had the pleasure to count on the technical staff of the Education First team NIPPO, professional cycling team of UCI World Tour. They visited us to carry out a series of biomechanical tests and assessments, both functional and chiropody to the cyclist Diego Camargo.

The Education First – NIPPO (EF) – has its base in Girona city or how is also said in cycling its “Service Course”. The EF team has a very important professional career in the professional cycling. This 2021 year it has showed with cyclists as important as Michael Valgren or Magnus Cort, who has won several stages of la “Vuelta to Spain 2021”. After knowing some part of the great team of the technical staff, we were able to check that a good team of cyclists is also forged by the team of professionals it has behind, something that it usually carries out in theory, but in practice we also have been able to check it like that. The Institut Català del Peu, through its Department of Biomechanical Assessment in the Sporting Performance, Fitmetric, carried out a very complete work with Diego. Diego is a Colombian cyclist who has recently arrived to the team after having stood out in his country, winning stages on this season in championships like “Tour of youth”, “Tour to San Juan”, or winning the championship of the “Tour to Colombia”. He is a very young cyclist of 23 years old who is pedaling very strong.

Regarding the beginning with EF (Education First), he has already taken part in the “Vuelta to Spain”, and, although he still has a lot to learn, as the same Diego says, he is doing it very well.

Diego has gone past the installations of the Institut Català del Peu next to the technical staff of the team in order to conduct several heats before going back to Colombia for his deserved rest. The heats which were carried out were heats which we usually carry out on cycling, like bike fit or road bike and against the clock, muscular performance test with biomechanical technology and lactate, and an exhaustive functional and chiropody assessment.

The series of heats are of a great help to coaches and physiotherapists of the team in order to help preventing lesions and also the improvement of the cyclist’s performance. Our work has been very specific in order to give the maximum to the team and to do ours bit to help Diego to ride better on bike and being able to perform his maximum, which is sure that in the 2022 year he will have a great success.

We are very grateful to the team for trusting in our work and also the pleasant manners. Not only it has been an assessment where we expect to provide as maximum as possible, but it has also been a pleasant day sharing a hobby which we enjoy so much.

THE INSTITUT CATALÀ DEL PEU CONDUCTS A BIOMECHANICAL ANALYSIS TO THE TENNIS...

LA VANGUARDIA PUBLISHES AN ITEM ABOUT “FITMETRIC” THE NEW PLAN OF THE INSTITUT...
Scroll to top