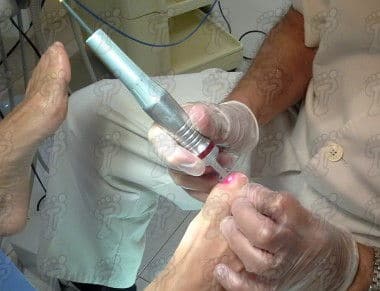 In the present study we are focused on our experience about the use of laser as the most current therapeutic system in the treatment of the onychomycosis as well as the results got through the therapeutic synergy of laser with the antimycotic topical treatment.

The onychomycosis is an infectious disease which affects to the nail in consistency, smell, thickness and color. The main infectious agents are the dermatophyte fungi (Trichophyton and Microsporum) followed by yeasts (Candida Albicans) and no dermatophyte molds (Aspergilus).

It affects to 4% of world population and it is the most frequent unguinal disease in developed countries. It has an aesthetic affectation although it may become worse in groups of risk like diabetic patients, immunodepressed or with peripheral vasculopathies.

The prevention is based on a correct daily hygiene, drying of foot, use of socks and shoes which will favor the transpiration as well as the use of personalized unguinal cutting means.

It is classified in five groups:

−     Distal and lateral subunguial onychomycosis : it is the most frequent. They are slow infections which affect to the color and thickness of the unguinal lamina.

−     Proximal subunguial onychomycosis : the infection starts in the cuticle and it moves forward to the unguinal edge. It is not very common in healthy people.

−     Total dystrophic onychomycosis : of slow development, they cause an hyperkeratosis in the hyponychium as well as thickness, a change in color or total unguinal devitalization.

−     White superficial onychomycosis : as this definition says, the infection shows a whitish color which invades the surface of the nail causing it a rough appearance.

−     Candidiasic onychomycosis : it shows an inflammation and pain in the sulcus matricis unguis, degenerating a distal and lateral onychomycosis.

AIM OF THE SURVEY

The aim of this survey is to contrast the effectiveness degree in onychomycosis of laser treatment versus laser compound and a topical antimycotic.

The laser which we use in our treatment is a laser of 1064 nanometers wavelength and 40 W power (S 30 Podylas TM) which works as an antimycotic respecting the surrounding tissues and without side effects.

The antimycotic which we use in the present survey is 5% solution Amorolfine. The Amorolfine is a wide spectrum fungicidal of the Morolphine group. It inhibits the synthesis of the ergosterol from the fungus membrane. It has a  high penetration at the level of the unguinal layer and it is given one or twice a week.

The laser therapy of the following survey consists of three application sessions with a resting period of 15 days between each session. We make an exhaustive cleaning of the infected nail previously to each session. Those patients who have lasertherapy treatment combined with topical antimycotic, are requested to apply Amorolfine from the first laser session to the complete regeneration  of the nail. This means that there are patients who are applied this treatment for 3 months to a maximum period of 9 months (depending both of the unguinal affectation regarding its depth and the speed to grow).

We have set up two researching groups with 20 patients each one:

In a nutshell, the laser therapy seems to be a good choice as an antimycotic treatment allowing a lower and more comfortable involvement by the patient in this therapy. The success varies in a high quantity depending on the kind of onychomycosis and its extension.

Application of laser in onychomycosis

End of treatment with only lasertherapy

End of treatment with only lasertherapy

Unguinal treatment before starting the treatment

End of treatment with lasertherapy and Amorolfine

End of treatment with lasertherapy and Amorolfine

The Institut Català del Peu makes an agreement with the football section of...