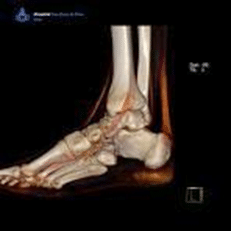 It consists of the joints between the distal peroneal tibia and superior aspect of the astragalus, also called distal tibioperoneal, tibioastragalus and peronealastragalus.The most important ligaments are the deltoid at a medial level and the ligamentum talotibiale anterius and posterius, tibiocalcanean and tibioscaphoid in a lateral level.

The astragalus, is a singular bone due to that it has no muscular insertions. However, it is covered by articular surfaces and ligamentous insertions.

It performs with its respective joints movements of dorsal flexure and plantar flexion, adduction, abduction, pronation and supination. Thus, when making an exploration we have to consider and to observe the features of movement.

The axis of the ankle’s movement is of dorsal flexure and abduction and of plantar flexion and adduction.

Most part of the movement takes place in the stage of total rest while  walking.

The width of movement varies among people depending on the osseous configuration,  the muscular flexibility and the ligamentous stability.

For a “normal” walking are approximately necessary 100 of dorsal flexure and 200 of plantar flexion.

In the dynamic stage the grades of dorsal flexure allow the tibia to turn on the foot just before the raising of the heel. The ankle exerts the dorsal flexure due that the foot is on a supination stage.

The dorsal flexure enables the foot to overcome obstacles in the oscillatory stage and helps the tibia to move the foot on the rest stage providing propulsion at the end of the dynamic rest stage.

The plantar flexion is necessary to provide enough propulsive strength at the end of the period of walking. 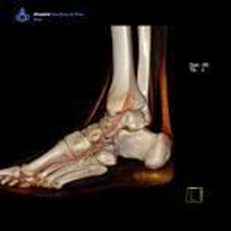 The movement that is executed during the walking is divided in three stages:

A)    Contact stage: the heel crashes against the ground and the result is a plantar flexion of the foot until the pretibial muscles get strength to withstand this movement, causing a slowing down and distribution of weight.

B)    Total rest stage: when the knee stretches out with the burden of the front part of the foot, the tibia moves forward above the fixed foot, causing to the latter a dorsiflexion.

C)    Active propulsion stage: the tibia moves forward with the raising of the plantar heel bending the foot. Once the heel has raised enough, the knee can bend.

The propulsion places the center of gravity and previous pressure to the rest source, causing in dynamics the biggest progression strength.

INSOLES FOR SUMMER
Scroll to top